The Studentendorf Schlachtensee is the nucleus of today´s cooperative with its academic housing complex near the Freie Universität in south-west Berlin as well as on the campus of the Humboldt Universität in Adlershof.

The Studentendorf (originally Studentendorf of the Freie Universität) is part of the extensive Re-education Programme of the USA. Not only should the future academic elite find a home here but also experience a political and democratic education. This idea is not only reflected in the architecture but in various institutions, like the tutor programme, the council and workgroups, the library and other cultural facilities, which have all been financed by the US State Department.

Since the beginning, the students’ interest in workgroups and democratic participation has been rather limited and only a few students developed self-initiative. The students – like any other students – preferred to meet at a dance event or at the parties. In 1961 Eleanor Lansing Dulles, co-founder of the campus and person in charge of the US Departments of Foreign affairs for the construction of Berlin, came to the sobering conclusion: it is not the intellectual elite that comes together in Schlachtensee but ordinary students with their everyday needs and problems, who were calling for more privacy, leisure time and comfort, just like students in the US. The ambitious project seemed to have failed. 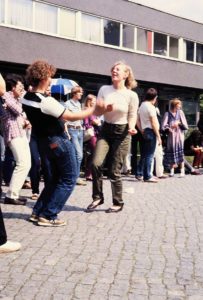 Summer Party in the 70s © Stallberger

It was the student movement of the so-called ‘68s and the death of the West-Berliner Benno Ohnesorg in 1967 that mobilized forces and political protest in the Studentendorf, and led to the legendary exchange of keys in the village square against gender separation or the strike actions for nationwide student housing benefits which started in July 1969.

In 1971 the Studentendorf was incorporated in the students union: from this point the senate was responsible for the operations and maintenance of the village. The student self administration (SV) was established representing the residents and operating – amongst others – the Club A 18 as a meeting point for residents and neighbours. 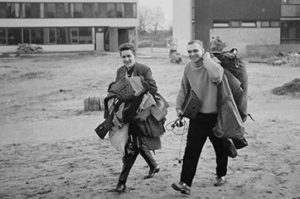 The lack of investment for the preservation of the village and correction of construction defects as well as increasing vacancy brought the village into disrepute. Therefore in 1982/1983 the student union investigated options for the restoration, expansion as well as the demolition and the rebuilding of the village. In 1985 the Berlin House of Representatives thereupon enacted the demolition and rebuilding of the village. In 1986 a custodian initiated plans to conserve the area as a heritage site. However, after an open debate, the plan to demolish and rebuild the village altogether was asserted and only the tree population was to be preserved.

Yet, the plans were never realised: Even before the fall of the wall, students and residents started to protest against housing shortage and rejected the demolition of the village. The Freie Universität also condemned the decision and insisted that the village ought to be restored.

In the end, the Studentendorf Schlachtensee was listed as an architectural and garden heritage in 1991. By the late 90s the discussion resumed, high investments made the restoration seem uneconomical and aroused interest in a lucrative exploitation.

Start of the refurbishment works on the 50th anniversary of the foundation stone ceremony, 2007 © StdS eG

Students do not give up

Again the students resisted as they strongly identified with the village and fought against the demolition. After searching for social and political support a group was founded at the Club A18 which organized the protest and started talks with the state of Berlin about buying the village – this group is the basis of today´s cooperative Studentendorf Schlachtensee eG.

By the end of 2003 – with only 20 residents still living in Schlachtensee – the negotiations had a breakthrough and the property was sold to the cooperative.

In 2006 the Federal Government endorsed the Studentendorf a National Heritage Site.

In 2007, 50 years after the groundbreaking ceremony, the cooperative started restoring house after house of the listed buildings. Numerous partners and sponsors – the Federal Government, the Deutsche Stiftung Denkmalschutz and above all the Freie Universität are an essential help in the process.

In 2014 the Studentendorf Schlachtensee got an offshoot. The newly built Studentendorf on the Adlershof campus was opened in October of that year. The ensemble with ten community orientated residential buildings and room for 386 students follows the urban development concept of Schlachtensee.

In 2015, with the reopening of the restored houses 9, 10, 22 and 23, the cooperative celebrated the completion of the first half of the renovation works. 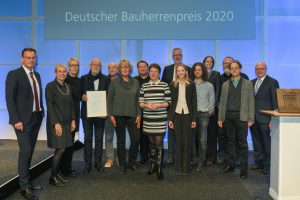 In 2019 the Studentendorf turned 60! In December the jubilee was commemorated with many guests and alumni. On this occasion also the newly designed exhibition room in house 10 was reopened.

In February 2020 the Studentendorf Schlachtensee was awarded the “Deutscher Bauherrenpreis” (German Construction Award) in the category “student housing”.

According to plan renovation works will be completed in 2023/24 and the village will then again be home for about 900 students from all over the world. Maybe even more – presently the construction of a supplementary residential building on the edge of the premises is under consideration.