Contemporary Living and studying in a postmodern monument

Situated in Berlin`s southwest, the Studentendorf is one of the most important contributions to the so-called Re-education programme of the German population after WWII. The aim was to support the upbringing of young people as citizens of a democratic Germany through architecture. The village counts as one of the most significant student villages – not only in Berlin but nationwide – due to its distinguished architecture. 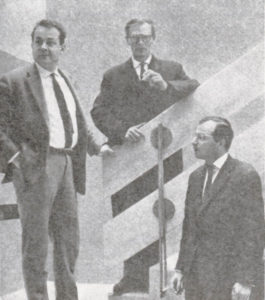 The 28 houses are composed like an urban landscape across the five hectares of the student village. The Berlin based Architectural Society of Hermann Fehling, Daniel Gogel and Peter Pfankuch planned the first stage. With the first stage, 1957 to 1959, 12 houses for men and six for women, the town hall, a shop and the library were built. The second stage, 1962 to 1964, included the semi-detached house, the central Community House and the residence of the academic director which no longer exists. 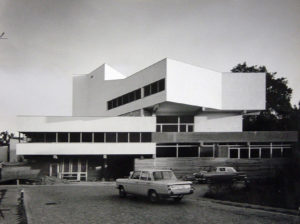 Except for the semi-detached house, all houses are one- or two-storied, each of them being built for up to 30 residents. The houses of the first and second building stage, including the furniture, are almost completely preserved. Four five-storied houses were added in a third building stage by the architects Krämer, Pfenning, Sieverts & Partner in 1976-1978. 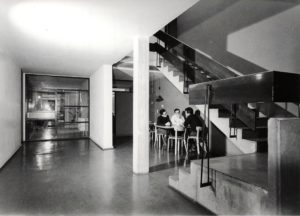 All houses are assembled around the village green in the centre of the campus and create a unique post-war modernist ensemble: the Community House, the theatre, the library (nowadays a gym) and the canteen (nowadays the Club A18) are located close to the town hall and the shop (nowadays kindergarten) and the former office of the mayor, now the town hall with the technical control room.

The student accommodation is comprised of diverse types of houses: ranging from multi-storey cubes, angular assembled houses to solitary units – opening and structuring the village in a harmonic composition. The architecture of the community house, with its expressive structural design, differs distinctly from the surrounding houses.

Living in a landmark garden

The floor plans vary for each house creating a clear rhythm of open and closed, wide and narrow, private and communal areas. The student units – lined up on an aisle – contrast with the open communal areas like the kitchens, which form the centre of academic living in the village. Due to overhead lights, interior glazing and large windows all houses are very connected with the garden. 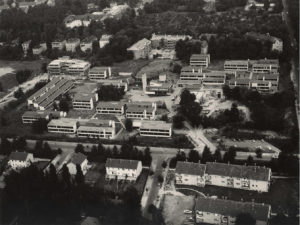 Since 2006 the student village has been appointed a National Cultural Monument. The Federal Government and the monument preserveration trust support the renovation of the viilage. 50 years after the first students moved to Schlachtensee, the first renovated houses could return to the residents. 7 houses have been reconstructed so far, rconstruction works of all houses will be completed by 2022/2023.

The unique quality of the Studentendorf is underlined by Hermann Mattern´s artistically designed landscape garden. The park is part of the National Heritage Studentendorf and is used by the students as an outside living room and for summer parties.

A minimalistic but efficient concept of restoration has been agreed upon with the monument preservation trust, which leaves the room composition by Fehling, Gogel and Pfankuch largely untouched and makes the Studentendorf a prime example of good energetic restoration of post-war modernism. In the process of restoration the communal areas are being redefined and new dwelling forms amended. Yet, the character of the village – a unique place for studying and living together – remains. 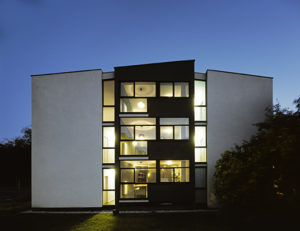 The principle is simple: Two become one, three become two. Two units are merged into an apartment, three units become a so-called doublette with an en-suite bathroom, and four or five units become a residential unit. Building equipment and original colouring are being restored; the original surfaces of coloured plastering, exposed concrete, wood and exposed brickwork revived, built-in furniture and kitchen refurbished.

By adding 6 cm to the insulation of the front of the buildings the energy consumption was cut in half, yet the delicate facade could remain. No embrasure is affected; the harmonic faces of the buildings remain intact. A triple glazing is added to the steel frames of the windows, replicating the original, restoring where possible. 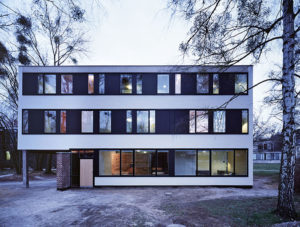 The restoration of the village is planned and carried out by the architects Winfried Brenne as well as Autzen und Reimers. The landmark garden is restored (according to the old plans of Hermann Mattern) under the architect Uwe Neumann.

The Studentendorf Adlershof is located opposite the faculties of physics and chemistry on Abram-Joffe-Str. Two four-storied houses form the entrance to the village, where the kindergarten, the rental office, the club, the gym and the launderette are situated. One- and two-bedroom apartments and guest rooms are also in this part of the village. 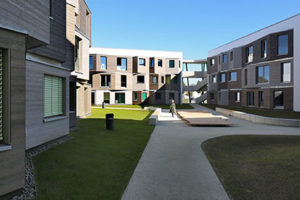 Behind the entrance eight three-storey houses define the campus, each house is connected to the village green by footpaths; four houses create a courtyard where the students can mingle and have a BBQ.

The houses are planned as “living spaces” – thirteen 15 sqm units with en-suite bathrooms merge into one 100 sqm living room with an open kitchen. Each unit has “Denkererker” – a philospher´s niche – with a desk, shelves and storage for comfortable studying and working where the students can find time and space for themselves.

Wood is the characteristic material in Adlershof. It regrows continuously, saves energy, is always available and sequesters C02. Wood is also a very durable material which also provides a cozy atmosphere. In short: wood is the ideal material for sustained recycling economy – which is very important to us when building academic accommodation in the 21st century.

Home away from home for international scientists

At first glance the five houses of the IBZ Berlin seem like ordinary rental houses. At second glance they reveal their fine details and unique treasures the architect Otto Steidle developed the complex – constructed between 1979-1983 – out of its surroundings: the Rüdesheimer Platz and the Rheinsche Viertel. As each flat is unique, the 78 units offer residents and their families a high level of comfort and individuality. 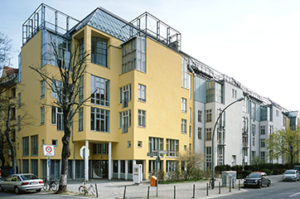 The smaller flats and apartments are located in the front of the complex, where there are three communal kitchens where the residents can meet and cook together. Other communal areas in the IBZ are a gym, a pool and table tennis room, a club and a library.

Remarkable is the diagonal staircase which connects not only all parts of the house but also creates an open space where everyone meets.

The garden was designed by Peter Latz and also reflects the surroundings of the building. The front garden refers to Rüdesheimer Platz, the street entrances are accented by trees.